jesus christ i never thought i'd be writing this. but you asked for it quite literally. i could throw up i feel so anxious writing this out but im really going to try my best.
personally i think you're more rebuild kaworu, as i am more rebuild shinji, but through whatever universe we're talking about you still just, remind me of him so deeply. i guess i'll start with the funny coincidences first.

> call me your angel *is literally an angel* this is absolutely something kaworu would do, no ill intent of course
> the beach. the strange connection between us and the beach. shinji and kaworu meet at the beach
v neon genesis evangelion - episode 24 v 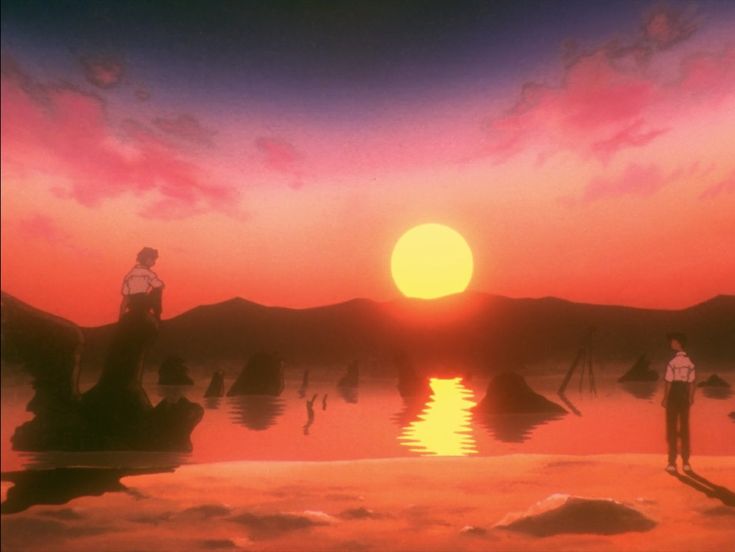 > "they're just buddies" <-- are deeply in love, this reminds me of us when we first met. which i can actually elaborate on, seeing as you were the one to make the first move, and i was the flustered, distant reciever. shinji does not want to admit his feelings towards kaworu, but he cant help but blush around him, hold his hand in the bathhouse, and. spoilers. but when the third impact is happening, even in shinjis deepest emotional state he sees kaworu coming forth to comfort him, you would assume it would be rei. but this is just showing his repressed feelings towards kaworu. i cannot deny that i felt the same way about you, i really didn't want to admit that i liked you, for what reason? im not quite sure i know. but as i've opened up to you and as our relationship has progressed, i cant help but feel like this is just so perfect somehow, the way that you and i are together, you feel like him. the warmth and softness that you show me, even after i've been some sort of arrogant cold-hearted "please don't talk to me i have no worth in this world" (something that shinji is insanely guilty of.) there is something in the way you talk that just reminds me of him, the poeticness of your words, the way they make me feel, you're just like him.

> i have never met someone who has felt more like him than you. and the more i experience with you, the more i learn about you, the more it just adds up. the scene that the image above is from, it feels like we have experienced this sort of exchange before. in this scene kaworu tells shinji he feels like "(he) really was born to meet (shinji)" (he says "i really was born to meet you") im actually pulling the movie up right now so i can get shinjis response but i forgot the scene changes immediately afterwards. however, if you haven't noticed shinji and i talk very similarly if not the same, just as you do, kaworu is able to put form into the things that shinji is unable to, even if it doesn't make much sense, he understands. just as you do with i

end of evangelion: 3.0 you can (not) redo: (46:28-46:57)
shinji: ever since i was little, taking in the vastness of the cosmos...has always relaxed me. it makes me happy, knowing that 14 years up there means so little. it's like i can lose myself, knowing i dont matter. it's soothing, i guess... it's hard to explain.
kaworu: the sentiment came across just fine. shunning change, you prefer the empty, merciless world of the abyss. that's very much you.
kaworu then thanks shinji for inviting him to come see the stars, (something we have been talking about doing...) and shinji in return chokes out
"don't mention it, i just thought, um...watching the stars with you might be fun." <-- hes blushing so hard its not even funny.
also the typesetting in the subtitles? the "..."s the "um"'s. hello??? are you seeing this??? THATS LITERALLY ME-

^ this scene between them is quite literally things we have said to eachother before. you understand me like nobody else. ^

are you seeing this.
are you. seeing. this.
you angelic bastard. this is exactly something that would come out of his mouth. every single thing you say is just, spot-on. how did i get so lucky?